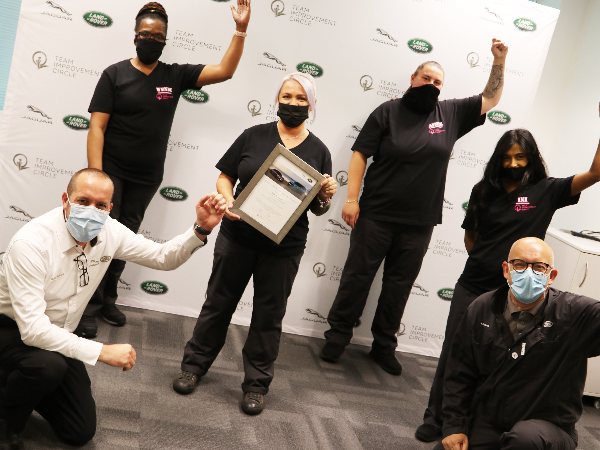 It was two days of tremendous talent at the TIC Circle Evaluations in July as 14 teams from the EMC and BAC gave it their best shot in front of the judging panel in hope of a place in the TIC finals in October.

We know that this year’s TIC process has been journey with many teams beginning their TIC projects in 2019 and many having to pause them during 2020 because of the pandemic.

But, the teams in July were recognised for their extraordinary efforts that went in to persevering throughout this challenging period and getting to the Circle Evaluations last week.

The first team up on the Thursday was ‘Kurbelbohrung HTV’… why the name I hear you ask? Well, it translates from German to English as ‘Crank bore honing’.

Team Leader, Sam Davies said: “Our TIC theme was an improvement project, but it involved translating a lot of German as some of the parts we were looking at only had technical information on in German, so we thought it was only right to go with a German TIC name given how many words we had to translate throughout the project.”

They wowed the judge with their innovative project and cost saving of £109,000 per year.

Then it was the team named ‘automaTIC’ who got the chance to impress the judges which EMC’s IT team delivered.

They were then followed by ‘The Only Way is Up’, and no it’s not because the circle members were from Essex, it’s because their theme was around upskilling some of the workforce in Catia software, something previously outsourced …. but not anymore! This particular project saw a one-off £200,000 saving.

As the day went on, the TIC projects continued at a very high standard with TIC teams ‘Dyna-mite’, ‘CPU’ and ‘TIC Legends’ all delivering incredible presentations. The decisions for our judging panel were only getting more and more difficult. But, that didn’t stop the panel from grilling the teams!

And if we thought Thursday was impressive enough, Friday’s TIC presentations were as equally mind-blowing as BAC Operations Director, Demos Hoursoglou and Halewood’s Operations Director (and TIC Chairman), Trevor Leeks joined the audience to watch them.

The first team up on Friday was BAC’s ‘BAC to the wild’ team whose project saw the creation of a well-being garden at their plant in order to improve employee well-being. Audience members and the judges were particularly impressed with the creation of a (5*) bug hotel!

They were followed by the ‘Durabunnies’ who got lots of laughs from the crowd as they donned pink bunny ears throughout their presentation.

And, they were followed by equally impressive presentations from ‘the pracTICal brothers;’ ‘firing on all cylinders’, ‘people make results’ and the ‘scrap TIC challenge’.

But, it was the only all-female TIC team that made a real entrance in to the competition as they entered with branded t-shirts and a fierce determination to impress the judges, and they did just that with their TIC theme which was about improving the ‘good spot’ safety process.

The final TIC Circle of the day was a family affair as Jo and Craig Hill teamed up with daughter and son-in-law, Kim and Dan Macefield to deliver their TIC presentation.

The buzz that was in the room for every TIC presentation was felt by all. A huge well done to all the TIC circles and coaches.

We were completely blown away by the calibre of TIC presentations, the attention to detail and perseverance that all of the teams displayed blew me and the audience members away.