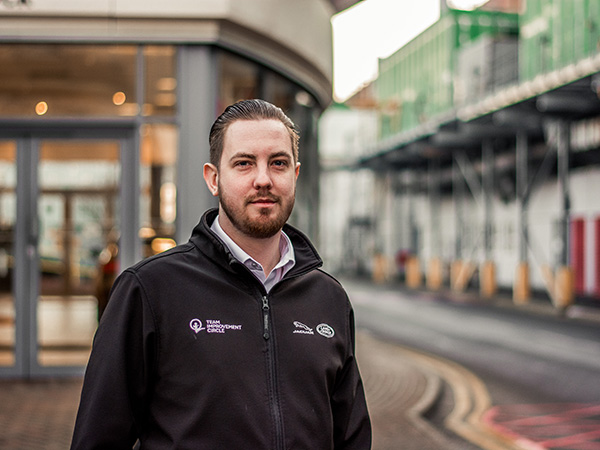 Tom Moore got involved in TIC as a way to get his voice heard and to prove what inside he always knew he was capable of. Little did he know it would kick start a journey transforming his confidence and inspiring a career change that would secure him a role within Advanced Manufacturing Engineering (AME).

Back in 2016 Tom was working at Castle Bromwich as a BIW associate doing a profiler role within XJ Trim and Final in F Block.

“I’d been with the company since 2012 and in my role for over five years,” said Tom. “I think I’d come to a point where I had decided I needed a new challenge, the daily routine had started to become a bit repetitive. I always knew I wanted to progress but if I’m honest didn’t know the best way to do it.

“What didn’t help was my confidence or lack of it, I was all too aware of the fact that back then I could be painfully shy at times.”

Tom says he had always had an interest in making improvements but had never really found those ideas getting traction.

“It was frustrating,” continued Tom. “On reflection knowing what I do now, part of it was because at the time I didn’t really have the ability to articulate and evidence my ideas, but mainly I felt there wasn’t an easy way to get my ideas heard in the first place.”

It was at this point that Tom was asked by a couple of the Group Leaders in the area, Gavin Barnes and Anthony Burke to join their newly formed Team Improvement Circle which would become aptly named ‘You Win Some, You Improve Some’.

“Joining the team the first year I really didn’t know what to expect and looking back it was a bit of slow going as we looked for a project,” Tom continued.

“We managed to pull in all the help we could and identified an issue the area was having with damage on console lids.

“We progressed the project and soon found ourselves nearing the local convention, which for me posed a problem as despite coming out of my shell a bit by that point I still hated the idea of standing up in front of a room of people.

“The thought of it was massive, at that point I wasn’t much of a fan of talking to people I didn’t know, let alone doing something like that.”

Despite the nerves on the day of the convention the team delivered a great presentation and were over the moon when they were selected to represent Castle Bromwich at the UK Regional Convention.

“That was the real moment it all changed, my confidence had taken a huge step up and I was walking tall after overcoming my nerves, I suddenly thought well if I can rise to that challenge then what can I do next?”

Tom and his teammates began to set their sights on the regionals and knuckled down to improve their project before the next stage of the competition.

“We took on all the feedback we could, from anyone willing to give it,” Tom continued. “Our coach Tony Gibbons pushed us hard and made sure we got opportunity to show that presentation to as many people as possible.

“When the regional convention came I don’t think it would be over exaggerating to say that our presentation was at least twice as good as it was at the locals. Our confidence was high and we performed well on the day. At the end, when it was announced that we’d won a place to go to India we were absolutely made up.”

The trip to India was a great experience for Tom who was surprised by how much was squeezed into the trip. When he returned he decided he needed to keep up his new found momentum, even if it meant doing it in his own time.

“By that point I was really developing a passion for problem solving, so I signed up for a Six Sigma online course outside of work. I just wanted to keep learning and build on the skills and knowledge that I’d learnt during our TIC project.”

Meanwhile back at work Tom had helped form a new TIC team and was also noticing a change in his day-to-day work life.

“Before I’d come into my work area, only really see the people I worked with directly and then go home, which I think is true for a lot of people in production areas,” he reflected. “Being involved with TIC introduced me to loads of new people at work who I’d never normally get to know.

“I found having these new contacts made a big difference when I was working on our new TIC project and my own continuous improvement ideas as you could approach a wider group to sound ideas off or get advice from.”

His team approached the second year of TIC all guns blazing and made a strong start despite a certain amount of self-generated pressure that came from having won it the first time around.

However, just as the team were progressing through the TIC ten steps nicely an opportunity arose for Tom that would risk him having to pull out of the team…

“I was continuing my Six Sigma studies outside of work, doing well at my job and getting really involved in extra continuous improvement activities,” continued Tom. “I really felt ready to take a step up in my career but was still a little unsure what that next step would be.”

Tom’s approach hadn’t gone unnoticed by Plant Quality Manager Steve Webb, who at the time was working as Tom’s manager in BIW. Steve had seen all the additional continuous improvement work Tom was involved in and suggested he take a look at an AME job vacancy for an Industrial Process Engineer position.

“I thought, like most people, the only route to progress through the business was to wait for a GL role to appear,” said Tom. “I’d sometimes look on Success Factors but for the most part as an associate the way engineering roles were presented just made them seem unattainable.

“Steve’s encouragement however broadened my horizons to other possibilities within the JLR and having researched the role I decided to apply as I thought I could bring something to it.”

The AME team obviously agreed and Tom was offered a role over at our Solihull plant. He was obviously chuffed, the only fly in the ointment was that he thought moving plants would mean he’d have to drop out of his TIC team at Castle Brom.

“I was gutted as I thought I’d have to let the other lads down,” Tom continued. “We’d all worked hard for four months on the project and I didn’t want to leave my team mates. To be honest I couldn’t just walk away and wanted to see the project through.”

For the next couple of months Tom made every effort to get over to Castle Bromwich to meet up with his team, progress their project and practice their presentation. The local convention was soon upon them and to the team’s delight they again made it through to the regional convention.

Between the conventions Tom travelled over to Castle Brom as often as he could to prepare for the regionals, however he admits the team didn’t get to rehearse as much as he’d have liked.

“On the day our team gave a great performance but you could clearly see the standard of presentation had definitely improved from the year before,” said Tom. “Some of them were just phenomenal to watch and you could clearly see how much TIC has taken hold across the business and how much effort people were putting into their projects.

“Unfortunately we didn’t manage to secure a spot on the plane to Brazil but even so I’d definitely say our second year experience was even better than the first. It was great to be able to see the members of our circle who hadn’t been involved in TIC before benefit the same way I had in my first year and to know I’d been able to be part of their development was a great feeling.”

At the time of our interview Tom had begun supporting a new circle over at Solihull, the ‘Costnutters’, who are running a project looking into redundant studs with a huge potential saving.

“I’d noticed the issue and thought it would make a great project,” he told us. “There was a circle already looking into something similar and I approached them to see if I could help. It’s the kind of thing the old me would never have dreamed of doing, it just shows how far my confidence has grown and it is all thanks to TIC.

“I can’t wait to help them out with their project, the potential there is huge. Very recently I’ve been asked to lead as a TIC coach for my new department in AME which is a great opportunity to help spread the word of TIC.“

I’m now looking forward to seeing where my third year of TIC takes me, hopefully it’ll be to Slovakia!”

“What didn’t help was my confidence or lack of it, I was all too aware of the fact that back then I could be painfully shy at times.”