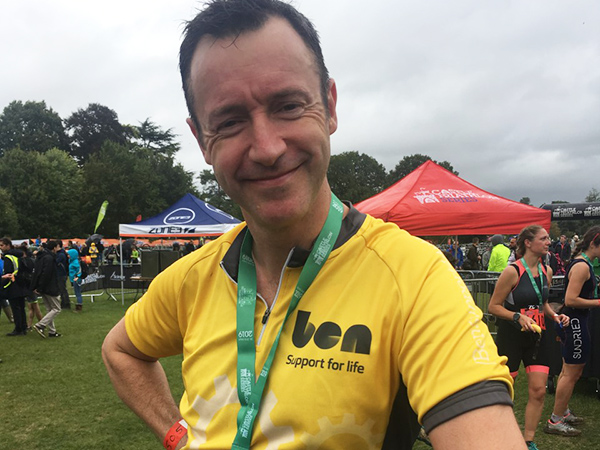 Walking the Walk With Paul Alcock

MPI’s Paul Alcock is just one event away from completing a series of gruelling challenges in 2019 to help support two mental health charities who’s support have had a profound impact on himself and his family over recent years.

A statistic that’ll you’ll probably have heard recently is that one in four people in the UK are now predicted to experience a mental health problem each year.

Mental health has long played second fiddle to physical health in terms of general understanding and medical provision but thanks to organisations like Mind and campaigns such as World Mental Health Day, it is finally starting to get the focus it needs.

As the wellbeing champion within the MPI team that’s something that Paul wants to encourage more of here at Castle Brom.

So much so, that when he decided to set himself a challenge to raise funds and awareness he decided that a one off activity wouldn’t quite cut it. So instead the dad-of-two teenage daughters decided to make a year of it.

“I was asked to pull together a presentation on wellbeing and the process of doing it made me realise that I perhaps hadn’t been paying as much attention to my own wellbeing as I would have liked, “ said Paul.

“I’m a keen cyclist and consider myself fit but reflecting on the last year I realised that I’d been turning down opportunities to get involved in things like the Wolf Runs and a coast to coast cycle event with my friends.

“I think I’d fallen into that trap where I was telling myself that I was way too busy and just didn’t have time between work and home life commitments to fit it in. When I worked it out, I hadn’t been out on my bike or the golf course anywhere near as much as I’d have liked either.

“I felt I needed to walk-the-walk rather than just talking about wellbeing, so I set myself a challenge. I knew if I just set one thing then it would come and go and then I’d be back in the same space, so I set myself a series of them spread out over the year to really commit to improving my fitness and wellbeing over a longer period of time.”

The 46-year-old has now nearly completed all of these challenges, the first two of which were the half marathon in his home town of Coventry and the Birmingham and Midlands Velo, a 100 mile cycling sportive that took place in May.

As well as upping his personal fitness, Paul is using these challenges as a way to support two charities that he is very close to and who’s great work have had a huge impact on his family.

“A number of years ago my youngest daughter went through a period of social anxiety at a very early age that really developed and didn’t get any easier as she went into her teenage years,” said Paul.

“What started as a desire to understand more and support our daughter turned into a passion to help others and my wife made the decision to leave her career in sales and marketing and retrained over four years to become a Therapeutic Counsellor.

“During her career transition my wife worked at the Coventry and Warwickshire Mind charity for the IAPT referral service and we’ve become quite close to the organisation as a family.

“Mind are kind of on the fridge of NHS funding and whilst they get some support, the charity needs to raise all the shortfall themselves, so I know any money I raise will be much appreciated”

The other charity Paul is raising money for is the Automotive Industry support service BEN.

“Since my wife set herself up as an independent Therapeutic Counsellor (Just Being Human Counselling) she has worked on behalf of BEN supporting people from the car industry.

“There’s something kind of poetic in the fact she’s now able to use her skills to support people from the industry that has supported us as a family for over 21 years.

“Again, anything I can raise for them I know will be put to good use.”

So now back onto the challenges…

Next up for Paul was a Three Peaks 24 hour event he took part with a group of friends at the start of July, born just a stone’s throw away from the foot of Mount Snowdon in North Wales this one is taking Paul back to his roots.

Then a still elusive 15,000ft skydive that’s almost 20 years in the making was planned to follow shortly after. Over the year’s Paul has attempted to complete the jump a couple of times but was initially stopped by bad weather and when he returned he found the airfield boarded shut as the company had gone into administration.

This time however it was Paul’s doctor who scuppered his plans when a shoulder ligament forced him to pull out of the jump on medical grounds. The good news is that his shoulder is back in good working order and he’s hoping that he’ll be able to complete the jump before the end of October.

Fingers crossed that the skydiving gods will be kind to you this time Paul.

What was originally planned as the final event and the ‘big one’ is an Olympic Triathlon that he completed at the end of September. The triathlon, billed as the UK’s second largest took place at Kent’s Hever Castle.

“This one was always the biggy,” Paul continued.

“I’d never done a triathlon before and the thought of jumping into open water with thousands of others kicking and splashing then swimming 1500m was all a bit nerve wracking. The swim part was probably the bit about the whole year of challenges that I was dreading the most.

“On the day these fears nearly came true as storms from previous day had blown loads of leaves and other debris into the water. After a delayed start we got into the water and it was so full of leaves that it felt like swimming through vegetable soup.

“The wet weather meant that we had to take it easier on the bikes but I still managed to complete it in three hours and 39 minutes, which was 21 minutes under my target time.

“When I completed it I was shattered, but elated in equal measure,” Paul concluded his triathlon tale, before adding.

“My daughter is in a really good place now and I’m thankful for the support she’s had along the way. She’s got through her exams, despite suffering panic attacks during her first few tests, but she deployed the coping strategies she’s developed and got some great results.  She is now started in Sixth Form with a positive outlook to completing her A-Levels over the next 2 years. I couldn’t be more proud of her.”

Paul has self-funded all the activities so that all the money he raises goes to the charities – if you’d like to show your support you still can on his BEN fundraising Just Giving page. 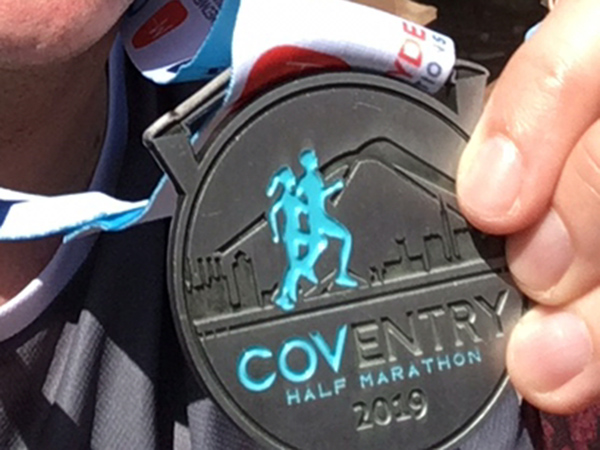