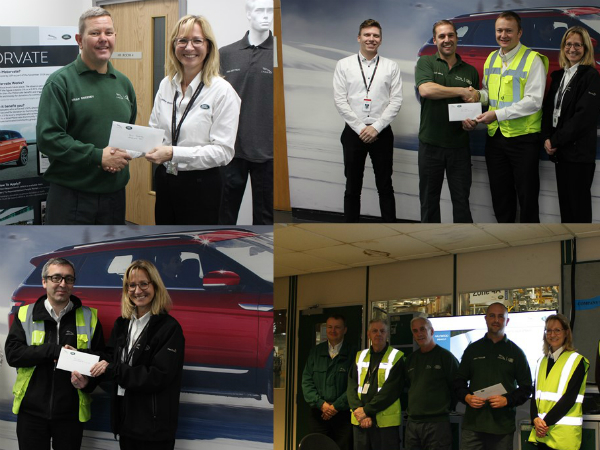 We've given to some great causes with our Motorvate cheques

We've given a massive £43,209 to 123 organisations or communities in the local area. Here are some of our most recent donations.

Brian Sweeney is the Manager (U14’s) and Club Chairman

of Sprinewood Junior Football Club. Sadly, the club were

recently hit by an arson attack which destroyed all their

equipment and devastated the club. They are rebuilding

the club at the moment and the Motorvate donation will

really help them to do this. We hope to seem them back up

starting an U7’s team in September. Sean started the club

himself and it slowly grew as more children joined. Sean

managed all the teams himself until some of the parents

got involved. The team were delighted to win the Premier

Cup recently and this donation will help them with training

equipment and to participate in more competitions.

aged from 13-20 from all backgrounds. The children are

challenged and taken on amazing adventures. They get to

do things like; camping, shooting, flying, sports, the Duke of

Edinburgh, BTEC qualifications and much more. They also

help charities and community groups where they can.

Jason’s daughter is a cadet and has had many great

experiences including attending D-Day services in

Normandy, taking a flight in a Chinook helicopter,

supermarkets and much more.

The cadets have a commitment and dedication to

enhancing young people’s lives. At the moment the mini

a contribution towards a new one. They travel all over

completing activities, supporting the community and

attending events so the mini bus is really important for

them to continue the great work they do.

Andrew Taylor is the Manager of the U8’s Bromborough and

Eastham Junior Football club and his sons also play for the

club. The team train during the week and play in various

leagues at the weekend. The club gives boys and girls the

chance to get involved in football and sports. The donation

will help them buy training kit and equipment.

MOTORVATE funds are linked to JLR Attendance. We have failed to reach our attendance target for the last quarter and therefore our funds are reducing. We need good attendance to keep the donations to good causes going. Application forms are available in any People Centre.