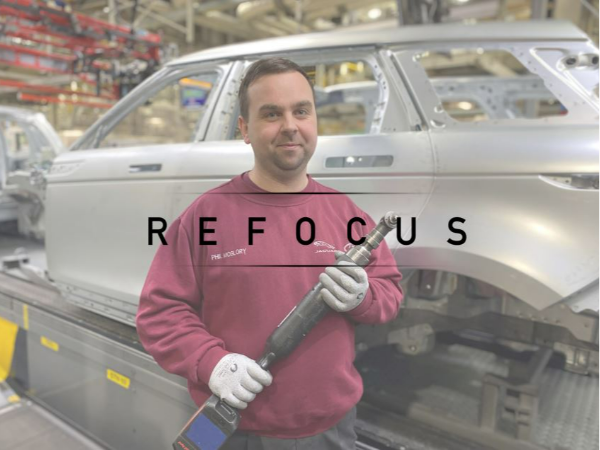 Phil McGlory, a Group Leader in Body in White, has raised a crackin Kaizen which has saved the business thousands of pounds as well as speed up delivery times on the Closure Fit Line.

It comes as no surprise that Phil has been named as our Kaizen of the Month, after he came up with an alternative solution to replacing the gun heads associates use to fix the bolts onto our car doors.

The heads had become worn over time, which meant that the TX part, which holds the securing ring inside the case of the gun, kept falling out when associates removed the gun from the bolt.

The associate would then have to pull the Andon and stop the line to secure the gun head back in, so a job which should take 75 seconds to complete was lasting up to three minutes.

However not one to shy away from a challenge, Phil teamed up with Barry Hulme, from the Tool Room, and together they devised a plan to modify the gun head with an extension collar and a grub screw, to hold the TX part in place.

The collar provides more support around the critical stress point of the TX part which reduces the risk of it snapping, which had been holding up the line.

Thanks to this incredible cross functional teamwork, this problem has now become a thing of the past, all the guns have been modified and there is no longer any more over cycle on the line due to the head falling off.

Asked about being named Kaizen of the Month, Phil said: “We have a new day job in Manufacturing- Refocus and for us on the line, that’s all about taking steps to improve what we do daily to drive quality and efficiency.

“This issue was affecting our delivery, as it was slowing us down, but we have removed that barrier now and by doing it in-house and utilising the skills we have in our Tool Room team- it’s cost us nothing.”

A huge congratulations to our Kaizen of the Month Runners Up, Lee Holmes from Paint Shop and Adrian Gore and Brian Derbyshire from Trim and Final.