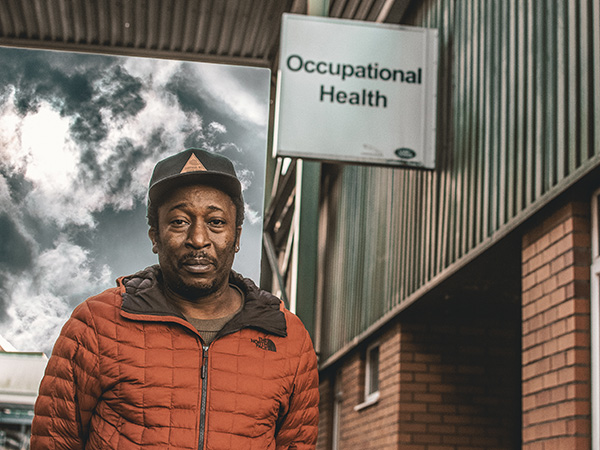 Castle Bromwich’s Donovan Jones opens up on his experience with prostate cancer.

The day is designed to raise awareness of the various forms of cancer that have impacted many of us but Donovan wanted to use the opportunity to talk about his shock cancer diagnosis and his recovery to spread the word about the importance of attending regular screenings.

The 54-year-old BIW associate has been part of the Castle Bromwich team since joining the company in 2010 and has over the years spend time in F, C and E block.

The summer of 2018 was the hottest one in the UK on record, for all those working outside of an air conditioned office it was making things a little sticky to say the least.

Donovan’s role in E Block involves physically demanding work within his cell anyway but the warm weather was really turning up the sweat levels.

He’d tucked away a rag in his back pocket so that he could mop his brow, however little did he know that when he took off his gloves to wipe his face, he was unwittingly contaminating his rag with tiny bits of the sealant used in his process and transferring it onto his face, this soon turned into a rash.

To make sure it wasn’t anything serious Donovan was advised to go down to the Occupational Health team to get it looked at. Concerned that it may be an allergic reaction the team suggested as a precaution that he went to his doctor for a blood test.

This bit of advice may just have saved his life.

“It was a simple blood test, they took three small samples and sent it off to be tested for a number of things,” said Donovan. “I was feeling generally fit and healthy so didn’t really think twice about it”

He certainly wasn’t expecting the news that came next.

“Two days later I was on my break at work when I noticed four missed calls from my GP surgery and a message asking me to make an appointment to see them immediately,” he recalled. “Strangely enough I wasn’t that concerned at first. I thought it was probably nothing and as I was at work I told the receptionist that I couldn’t get down until later in the week.

“When the doctor called back to say that it couldn’t wait and they’d cleared a late appointment for me was when I suddenly began to realise it could be serious.”

Donovan arrived at the doctors, was sat down and told that the blood test had picked up an anomaly in his blood that is usually associated with prostate cancer.

“Then it just hit me, I thought oh my life. About a hundred worries suddenly appear in your head all at once, what will happen to me next and will my family be okay were the main ones.

“I was still feeling physically fine so I returned to work, but obviously it was like a dark cloud hanging over me while I waited for further tests to be arranged.”

Additional tests including a biopsy confirmed that he had cancer on both sides of his prostate. The good news at that point was they were confident they had caught it early, before it had chance to spread.

The next step was to discuss treatment options, which for Donovan included radio therapy or an operation to remove his prostate.

“It was obviously a big decision,” said Donovan. “Everyone needs to take the advice specific to their situation and each course comes with its own pros and cons but for me personally the operation to remove my prostate seemed like the best way to ensure as best they can that the cancer didn’t return.”

He clearly recalls the date his surgery was booked in.

“The god’s honest truth was that I was nervous before the operation, I wasn’t eating properly and the weight was falling off me. This was the first time I’d had an operation in my life, I remember them pumping that grey cold liquid into me but nothing after that, not a damn thing.”

Donovan woke up in the recovery ward at the Queen Elizabeth Hospital in Birmingham to the good news that the operation had gone well and they were confident they’d removed all that they could.

He was in hospital for three more days, but it was when he got home that his recovery would really begin.

“The period afterwards is difficult and it takes time to adjust,” Donovan recalled honestly. “I know some will think this embarrassing and shy away from talking about it but the reality is that following a prostate operation you’ll need to work hard to regain lost bladder control and the first few weeks aren’t exactly much fun.”

With the support of his family, the NHS and the MacMillan Cancer Support charity, Donovan began working hard on his rehabilitation. It was during this period that he would discover something that would both hit him hard and inspire him to tell his story in the hope that others would get themselves checked out.

“I found out that my neighbour who I’d known for years had got the same thing as me, only his was not caught until the late stages and he had been given a terminal diagnosis.

“He never knew he had it, he’d ignored back pain and other symptoms and as a result 13 months later he’s no longer with us. It’s the exact same illness as I had and that’s what happens when you miss it. That could so easily have been me.”

Ironically, Donovan had been previously vigilant and had a check for prostate cancer two years ago and at the time gotten the all clear. He knew he should probably arrange another check soon, especially as Caribbean men fall into a higher risk category than most.

“I was due for another check soon and my wife kept reminding me to go but I didn’t get round to it,” said Donovan. “If I’d never been referred for that blood check by the Occupational Health team then I would have gone undiagnosed and I’m pretty sure my outcome would have been much different.”

That thought stays firmly with him which is why he’s been telling his mates in E Block and anyone else who will listen the importance of going to get checked.

Despite this he thinks only a couple have made time to do it and he’s hoping that by opening up and honestly sharing his experience in this interview he can cut through to more people and get them talking about the issue.

Another thing that he thinks is putting men off is the misconception that the first thing that will happen is you’ll be given the physical examination. He wants more people to realise that the first stage is a simple blood test, as he thinks it will increase the likeness of people going.

You’ll only be asked back for a physical examination if they suspect that there’s an issue. At which point that may be a little awkward but your doctor certainly isn’t fazed by it and I’m sure you’ll agree a little embarrassment is a small price to pay when it comes to potentially saving your life.

Donovan has preliminarily been given the all clear, he’s now just awaiting on one last test to confirm it. He’s currently itching to get his life back to normality.

“I’ve always worked and I’m bored stiff sitting around all day, believe me there’s only so many decent box sets out there,” joked Donovan. “I can’t wait to get back to work which will hopefully be soon. I’m also keen on getting some use out of my new mountain bike that’s been gathering dust since I bought it last summer.”

We’re wishing him a speedy recovery and hope to see him amongst us at Castle Brom soon. Before we let him go we asked if he had a direct message for those thinking of getting checked out after reading this article.

“Like me you’ll go about your life thinking you’re bullet proof, that you can shrug it off and that you don’t need to get checked up but the fact is that it not that simple.

“If you’re thinking of getting checked after reading this I’d tell you don’t put it off, just go and do it.”

After reading the story, Dr. Steve Iley, Jaguar Land Rover’s Chief Medical Officer, agreed with Donovan, adding:  “Good occupational health is good medicine. We should be helping to prevent and detect illness early, not waiting until someone is really sick or off work. Always see your doctor if you are worried about something that isn't getting better."

He went on to say that if you have a medical concern at work, contact the occupational health team as soon as possible, who can offer you support and guidance on what to do next.

Like me you’ll go about your life thinking you’re bullet proof, that you can shrug it off and that you don’t need to get checked up but the fact is that it not that simple.

If you’re thinking of getting checked after reading this I’d tell you don’t put it off, just go and do it.