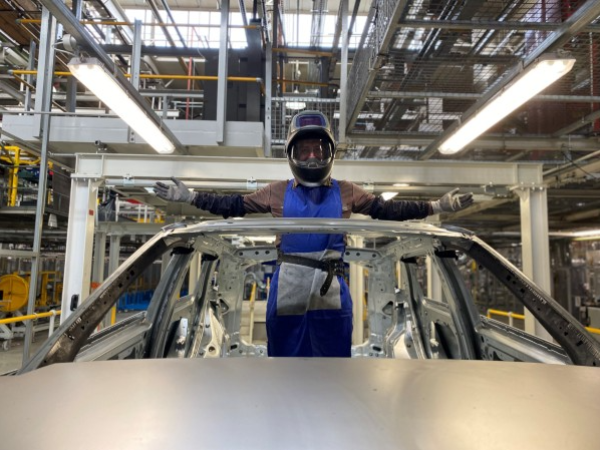 A huge congratulations to Halewood’s Terry Callaghan who was crowned winner of the President’s Award, at Jaguar Land Rover’s 2021 Innovation Challenge.

The three-day event took place at the Engine Manufacturing Centre from Wednesday 22 to Friday 24 September and was attended by 500 people- as well as being streamed live to colleagues across the globe.

Terry, who is an associate in Body in White and is a trained welder, beat of stiff competition to named winner of the prestigious President’s Award, which was chosen and presented to him by JLR Global Manufacturing Director, Grant McPherson.

The President’s Award is given to an individual who has demonstrated the Jaguar Land Rover spirit of perseverance and passion for the business.

Terry was awarded the coveted prize for his innovative idea which saw him develop a new repair standard from scratch (most of it from home), which has significantly improved the laser braze defect fallout rate, on the fixed roof of the Evoque.

This was an ongoing quality issue that was costing Halewood over £55,000 a year in scrap costs alone! He has now trained associates across different shifts in the process so they can successfully carry out the repairs. And since Terry’s terrific idea has been rolled out, the department hasn’t had to scrap a single BIW unit due to a laser braze defect.

Terry is also a rising star in the business and was recently named Employee of the Month and is part of one of the five Halewood TIC circles, that are being progressed to the final stages of the TIC UK Recognition Activities, this autumn.

Speaking about his win, Terry said: “I couldn’t believe it when Grant read out my name- I was speechless and went beetroot.

“Out of the hundreds of people stood there in that room, which included managers, supervisor’s engineers, people with degrees, apprentices- they picked me- an operator off the line and I felt so proud.

Asked what it was like to present to the Global Director of Manufacturing, Terry said: “I always thought I would be intimidated speaking with Grant because of his position but taking part in TIC and the laser braze repair process has really brought me out of my comfort zone, so I felt prepared and enjoyed it.

“It wasn’t easy, and he knows how to keep you on your toes. When he came over, he told me I had sixty seconds to explain my idea to him- which normally takes me around 15 minutes- but I managed it and must have done a good job!”

Terry added: “After the presentation, Grant told me that my passion had shone through my work and that really meant a lot to me. I saw some of the ideas that were being presented- the calibre was high, and some were really complex, but simple ideas like the laser braze can save money make a huge difference.”