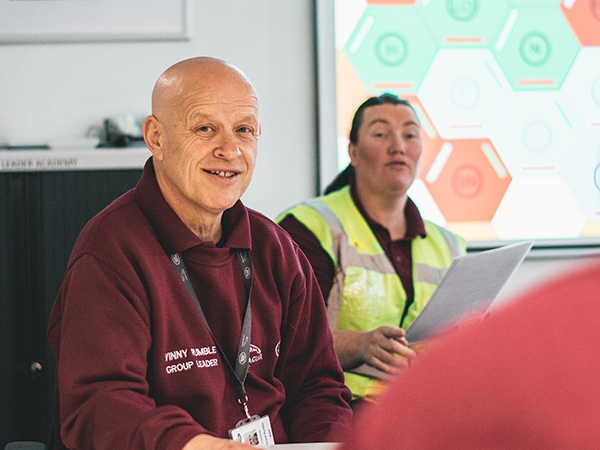 The old saying goes, you can’t teach an old dog new tricks. Having caught up with Vinny Rumble about his Group Leader Academy (GLA) experience, we’d have to disagree.

Vinny or going by the full title bestowed on him by his colleagues from F Block, ‘The legend that is Vinny Rumble’ has been at Jaguar since 1976, having started at Browns Lane with his identical twin brother nearly 44-years-ago.

“We both started at the same time but worked in different departments,” recalled Vinny. “People used to get us mixed up all the time, either that or they used to think I was in two places at once, which did sometimes prove useful.

“I’d worked with people for years before they realised I actually had an identical twin, I think a few of them thought I was having them on for a while.”

Vinny became a Group Leader back in 1997 and in 2001 his brother Euan went to work in Press Shop Operations, putting paid to any further comical mix-ups after that.

Later, Vinny made the move to Castle Bromwich and has worked on XJ ever since.

We spoke to Vinny before the summer break just as the final XJ X351 was making its way through F Block. We’d been tipped off about how he’d impressed on his recent GLA course and why he’s championing the importance of learning and self-development regardless of where you are in your working life.

“I was perhaps a little apprehensive before going on the course, but having done it I can’t speak highly enough of it,” said Vinny. “It was really educational and fun too, I really did enjoy all of the modules.

“The trainers and presenters were all really excellent, I’ve learnt loads and have already started using that knowledge to become a better Group Leader.”

One of the main things he tells us he’s been doing differently is involving his team more in decision making and generating ideas.

“For me my biggest take-away from it is getting your team involved,” says Vinny.

“Recently I did a risk assessment in my area and previously I’d think I had to do it all myself. This time though practising what I learnt on the GLA, I got my Associates involved to feed into it. Not only did it make it quicker for me to do, it also meant that everyone felt involved and completely bought in to the new changes we put in as a result.”

“Since returning from the course I’ve really been looking at my team in a new way and seeing all their potential and what I can do to encourage them to develop.”

The GLA isn’t the only thing the 63-year-old has been up to this year either, he’s also got involved in TIC for the first time too. In fact, his team Up to Scratch have made it through to the UK Regional Convention to be held at the National Conference Centre later this summer.

“I’ve found that to be a great learning experience,” he says. “I’m known for being a bit of a character but when I’m in a situation I’ve not been in before like anyone I can get a bit nervous. TIC took me out of my comfort zone, it was something completely different but I really enjoyed it.

“I made a special effort to get myself all dressed up too, even shelling out on new trousers and shoes for the convention It felt like such an important event, so I wanted to be looking my best for the day.

“At 63, I felt I was probably the oldest one there, but I loved it. I really would recommend that anybody at any age, young or old to get involved in TIC.

“There were no losers, all of the 34 teams that took part were all winners, because they were all there making a difference for our plant’s future.”

Vinny has clearly got a passion for it, but what about those people who would question what you could possibly teach someone that they don’t already know after 43 years?

“You’re never too old to learn and those who tell you they know it all are telling little fibs,” he says.

“No matter how long you’ve been somewhere there are always new ways to do things and ways to improve what you do. The minute you think you know it all is the time you should start to think about packing it in.”

And, he certainly isn’t ready to do that just yet.

“My brother retired last year and he and others have asked me why I didn’t take the recent early retirement package offered,” he said. “Obviously I’ve thought about my retirement, but I’m not there just yet.

“I want to go when I’m ready and when that time comes I’ll go knowing I’ve given it my all whilst I’ve been here. Until then I think I’ve still got a lot to offer and want to leave a legacy behind me.

“I’ve got a great new role in D block and am looking forward to the challenge. I’m going to make an impact there like I have in F Block.

“I’ve loved working for the Jag over the years and I’d like to pass on some of my knowledge and passion to people coming up in the company today.

“Castle Brom has got a bright future and I want to keep contributing to it for a few more years to come.”

1
SUSTAINABILITY: BIW FLICK THE SWITCH ON ENERGY SPEND
View more
7
BAG-STREET BOYS OF OUR ENGINE MANUFACTURING CENTRE HAVE A NUMBER ONE HIT WITH SAVING ON PLASTIC BAGS