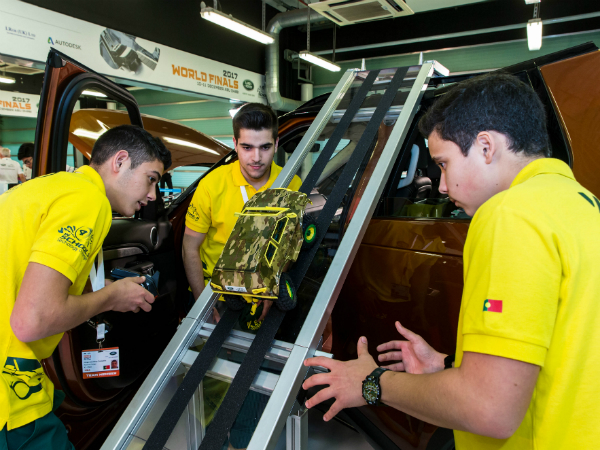 The bright young engineers, aged 11-19, used computer coding to programme miniature remote-controlled four-wheel-drive vehicles they have designed and built for a two-day competition at the Yas Marina Circuit. One of the challenges saw the vehicles negotiate a demanding course that wound its way over and through Land Rover Discovery SUVs.

The contest, which supports curriculum learning, included an autonomous car coding challenge, reflecting Jaguar Land Rover’s commitment to Science, Technology, Engineering and Maths (STEM) subjects and a desire to recruit the next generation of engineers to design and develop future electric, connected and autonomous vehicles. The surprise coding task required them to optimise an existing set of code to help a model SUV complete a pre-set course in the fastest possible time.

K-EVO from Portugal were crowned 2017 champions; with Panthera, Malaysia and Fair Dinkum 4x4, Australia in second and third places respectively.

Team leader Luís Ligeiro, aged 17, said: “The challenge has provided us with fantastic hands-on experience of running a mini-business and writing our own code. We were all interested in STEM before but now, after learning all about the Land Rover Discovery production processes and electronics, we’d love to be engineers innovating and creating vehicles in the future.”

The global competition has helped the company reach more than three million young people since 2000. Teams qualify for the world finals through a series of regional and national events, with the winning team, K-EVO having come first in the Portuguese National Final.

The winning vehicle features multi-link suspension, replicating the Land Rover Discovery, and was made using natural, modern and recycled materials such as biopolymers, plastics and aluminium which were a key consideration in the judges’ scoring.

The UK’s leading investor in research and development, Jaguar Land Rover has launched a global initiative which aims to recruit more than 1,000 electronic and software engineers to its expanding business. In June this year, the company launched an innovative, mixed-reality recruitment app in collaboration with virtual band Gorillaz to find global future engineering talent.

Keep your eyes peeled for future articles about the teams and people involved in the challenge.

1
The kids take over!